Since June 17th is Gram's birthday, I thought I'd share a couple of items which commemorate that event. The first is a copy of her birth announcement. It was sent to her paternal grandparents, James Monroe and Nellie Upton in Spring Creek, Pennsylvania. The most remarkable thing is the postmark. Gram's was born on the 17th and the postcard is postmarked the 17th! Her mother, Elsie Greenwell Upton, must have been the most uber-efficient new mother in Oregon that year! 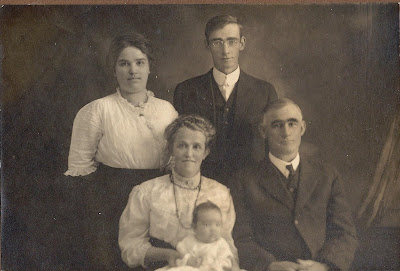 The 2nd item is a photograph of three generations of the Upton family. It was taken not long after Gram's was born - she is the blurry baby in the photo. Her mother, Elsie Greenwell Upton is in the back row, as is her father, Otto D. Upton. Otto had been estranged from his family. His father was a "difficult" man, and Otto left home when he was about 15 years old. In the 1910 census Otto is found in Spokane County, WA working in a logging camp. I like to think that the birth of a new grandchild provided the impetus for family reconciliation. Anyway, the elder Uptons travelled out to Oregon to have a "look-see" at the new baby! In the front row holding Grams is Ellen Augusta (Nellie) Carter Upton. Also in the front row is Nellie's husband, James Monroe Upton. Nellie was born in 1863 on the day her father joined the Union Army to fight in the Civil War! So with one photograph we span the 19th, 20th, and 21st centuries for our own family history lesson.
Posted by Beth at 10:16 AM

Beth
I have resided in Lane County, Oregon most of my life, except while I attended Lewis and Clark College in Portland, Oregon. I enjoy gardening, cross stitching, reading, and genealogy. 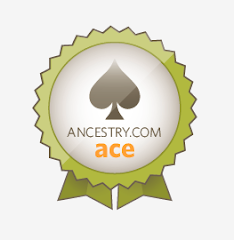